Marriage to the Prince of Wales

Diana first met Charles, Prince of Wales, in November 1977 when he was dating her sister, Lady Sarah. He took a serious interest in her as a potential bride during the summer of 1980, when they were guests at a country weekend, where she watched him play polo. The relationship developed as he invited her for a sailing weekend to Cowes aboard the royal yacht Britannia. This was followed by an invitation to Balmoral (the Royal Family’s Scottish residence) to meet his family a weekend in November 1980. Lady Diana was well received by the Queen, the Duke of Edinburgh, and Queen Elizabeth The Queen Mother. The couple subsequently courted in London. The prince proposed on 6 February 1981, and Lady Diana accepted, but their engagement was kept secret for the next few weeks. 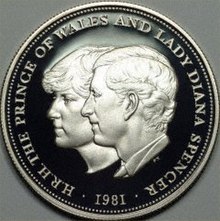 Charles and Diana’s wedding commemorated on a 1981 British Crown

Their engagement became official on 24 February 1981. Lady Diana selected a large engagement ring consisting of 14 solitaire diamonds surrounding a 12-carat oval blue Ceylon sapphire set in 18-carat white gold, similar to her mother’s engagement ring. The ring was made by the then Crown jewelers Garrard but, unusually for a ring for a member of the Royal Family, it was not unique; it was featured in Garrard’s jewelry collection. In 2010 the ring became the engagement ring of Catherine, Duchess of Cambridge. It was copied by jewelers all over the world. The Queen Mother gave Lady Diana a sapphire and diamond brooch as an engagement present.

Following the engagement Lady Diana left her job at the nursery and lived at Clarence House, then home of the Queen Mother, for a short period. She then lived at Buckingham Palace until the wedding. Her first public appearance with Prince Charles was in a charity ball in March 1981 at Goldsmiths’ Hall, where she met the Princess of Monaco.

Twenty-year-old Diana became Princess of Wales when she married the Prince of Wales on 29 July 1981 at St Paul’s Cathedral, which offered more seating than Westminster Abbey, generally used for royal nuptials. Widely described as a “fairy-tale wedding”, it was watched by a global television audience of 750 million while 600,000 people lined the streets to catch a glimpse of the couple en route to the ceremony.

At the altar, Diana accidentally reversed the order of Charles’s first two names, saying “Philip Charles” Arthur George instead. She did not say that she would “obey” him; that traditional vow was left out at the couple’s request, which caused some comment at the time. Diana wore a dress valued at £9,000 with a 25-foot (7.62-meter) train. Music and songs used during the wedding included the “Prince of Denmark’s March”, “I Vow to Thee, My Country”, “Pomp and Circumstance No.4”, and “God Save the Queen”.

After becoming Princess of Wales, Diana automatically acquired rank as the third-highest female in the United Kingdom Order of Precedence (after the Queen and the Queen Mother), and was fifth or sixth in the orders of precedence of her other realms, following the Queen, the relevant viceroy, the Duke of Edinburgh, and the Prince of Wales. Within a few years of the wedding, the Queen extended Diana visible tokens of membership in the Royal Family; she lent the Princess a tiara and granted her the badge of the Royal Family Order of Queen Elizabeth II.

Within five years of her marriage, the couple’s incompatibility and age difference (almost 13 years), as well as Diana’s concern about Charles’s relationship with Camilla Parker Bowles, became visible and damaging to their marriage. During the early 1990s, the marriage of the Prince and Princess of Wales fell apart, an event at first suppressed, then sensationalized, by the world media. Both the Princess and Prince spoke to the press through friends, each blaming the other for the marriage’s demise.

The chronology of the break-up identifies reported difficulties between the Prince and Princess as early as 1985. The Prince of Wales resumed his affair with his now-married former girlfriend, Camilla Parker Bowles; later, the Princess of Wales began a relationship with Major James Hewitt. These affairs were exposed in May 1992 with the publication of Diana: Her True Story by Andrew Morton. It was serialized in The Sunday Times before its publication. The book, which also laid bare the Princess’ allegedly suicidal unhappiness, caused a media storm. During 1992 and 1993, leaked tapes of telephone conversations negatively reflected on both the royal antagonists. Tape recordings of the Princess and James Gilbey were made available by The Sun newspaper’s hotline in August 1992. Transcripts of taped intimate conversations were published by The Sun in August 1992. The article’s title, “Squidgygate”, referenced Gilbey’s affectionate nickname for Diana. The next to surface, in November 1992, were the leaked “Camillagate” tapes, intimate exchanges between the Prince of Wales and Camilla, published in Today and the Daily Mirror.

In the meantime, rumors had begun to surface about the Princess of Wales’s relationship with Hewitt, her and her children’s former riding instructor. These would be brought into the open by the publication in 1994 of a book by Anna Pasternak titled Princess in Love, which was filmed under the same title in a movie directed by David Greene in 1996.The Princess of Wales was portrayed by Julie Cox and James Hewitt was portrayed by Christopher Villiers.

In December 1992, Prime Minister John Major announced the couple’s “amicable separation” to the House of Commons, and the full Camillagate transcript was published a month later in the newspapers, in January 1993. On 3 December 1993, the Princess of Wales announced her withdrawal from public life.

The Prince of Wales sought public understanding via a televised interview with Jonathan Dimbleby on 29 June 1994. In this he confirmed his own extramarital affair with Camilla Parker Bowles, saying that he had rekindled their association in 1986, only after his marriage to the Princess had “irretrievably broken down”.

While she blamed Camilla Parker Bowles for her marital troubles because of her previous relationship with the Prince, the Princess at some point began to believe that he had other affairs. In October 1993, she wrote to a friend that she believed her husband was now in love with his personal assistant (and his sons’ former nanny) Tiggy Legge-Bourke and wanted to marry her. Legge-Bourke had been hired by the Prince as a young companion for his sons while they were in his care, and the Princess was resentful of Legge-Bourke and her relationship with the young princes.

Diana’s aunt-in-law, Princess Margaret, Countess of Snowdon, burnt “highly personal” letters that Diana wrote to the Queen Mother in 1993 because she thought they were considered to be “so private”. Biographer William Shawcross wrote: “No doubt Princess Margaret felt that she was protecting her mother and other members of the family”. He considered Princess Margaret’s action to be “understandable, although regrettable from a historical viewpoint”.

Authors Tina Brown, Sally Bedell Smith and Sarah Bradford are some of the many writers who fully supported Diana’s own admission in her 1995 BBC Panorama interview that she had suffered from depression, “rampant bulimia” and had engaged numerous times in the act of self mutilation; the show’s transcript records Diana confirming many of her problems to interviewer Martin Bashir, including that she had “hurt (her) arms and legs”. The combination of illnesses from which Diana herself said that she suffered resulted in some of her biographers opining that she had Borderline Personality Disorder.

The Princess of Wales was interviewed for the BBC current affairs show Panorama by journalist Martin Bashir; the interview was broadcast on 20 November 1995. Of her relationship with Hewitt, the Princess said to Bashir, “Yes, I adored him. Yes, I was in love with him. But I was very let down [by him].” Referring to her husband’s affair with Camilla Parker Bowles, she said, “Well, there were three of us in this marriage, so it was a bit crowded.” Of herself, she said, “I’d like to be a queen of people’s hearts.” On the Prince of Wales’ suitability for kingship, she stated, “Because I know the character I would think that the top job, as I call it, would bring enormous limitations to him, and I don’t know whether he could adapt to that.”

On 20 December 1995, Buckingham Palace publicly announced the Queen had sent letters to the Prince and Princess of Wales advising them to divorce. The Queen’s move was backed by the Prime Minister and by senior Privy Counsellors, and, according to the BBC, was decided after two weeks of talks. Prince Charles formally agreed to the divorce in a written statement soon after. In February 1996, the Princess announced her agreement after negotiations with the Prince and representatives of the Queen, irritating Buckingham Palace by issuing her own announcement of the divorce agreement and its terms. In July 1996, the couple agreed on the terms of their divorce.

The divorce was finalized on 28 August 1996. Diana received a lump sum settlement of £17 million as well as £400,000 per year. The couple signed a confidentiality agreement that prohibited them from discussing the details of the divorce or of their married life.

Days before the decree absolute of divorce, Letters Patent were issued with general rules to regulate royal titles after divorce. As she was no longer married to the Prince of Wales, Diana lost the style Her Royal Highness and instead was styled Diana, Princess of Wales. As the mother of the prince expected to one day ascend to the throne, she was accorded the same precedence she enjoyed during her marriage. Prince William was reported to have reassured his mother: “Don’t worry, Mummy, I will give it back to you one day when I am King.” Almost a year before, according to Tina Brown, the Duke of Edinburgh had warned the Princess of Wales: “If you don’t behave, my girl, we’ll take your title away.” She is said to have replied: “My title is a lot older than yours, Philip.”

Buckingham Palace stated the Princess of Wales was still a member of the Royal Family, as she was the mother of the second and third in line to the throne. This was confirmed by the Deputy Coroner of the Queen’s Household, Baroness Butler-Sloss, after a pre-hearing on 8 January 2007: “I am satisfied that at her death, Diana, Princess of Wales continued to be considered as a member of the Royal Household.” This appears to have been confirmed in the High Court judicial review matter of Al Fayed & Ors v Butler-Sloss. In that case, three High Court judges accepted submissions that “the very name ‘Coroner to the Queen’s Household’ gave the appearance of partiality in the context of inquests into the deaths of two people, one of whom was a member of the Royal Family and the other was not.”

Kate ‘more regal than Royal Family’ thanks to natural Middleton trait ‘What a paradox!’