But what has the fully-fledged royal been up to since swapping her Hollywood home for a life behind the Kensington Palace gates?

From the couple’s debut post-wedding engagement to Meghan’s first solo outing with Queen Elizabeth II: Here’s every outfit, appearance, and achievement the Duchess of Sussex has made since bagging a royal title.

The Duke and Duchess of Sussex’s honeymoon period was short-lived, as the couple made their debut appearance as newlyweds at Prince Charles’ 70th birthday party just three days after the royal nuptials.

On 22 May 2018, the couple joined 6,000 guests at Buckingham Palace to celebrate and the event marked the Duchess’ debut garden party hosted by Her Majesty.

But the Duchess’ first post-wedding look sparked criticism on social media as many accused the royal of conforming to antiqued royal fashion rules.

Before the royal wedding, Meghan was praised for breaking the royal rule book with everything from her messy bun to cross-body Strathberry bags. But her Goat dress (note: a go-to label for the Duchess of Cambridge) and powder pink tights caused a stir on Twitter. 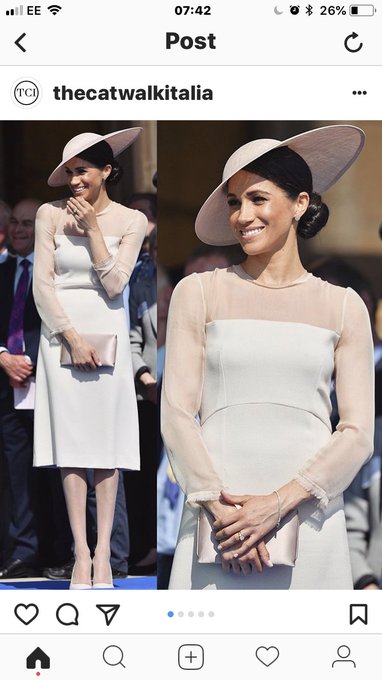 One social media user wrote [sic]: “Oh, no, they’ve broken Meghan Markle already with the flesh-coloured tights, and it’s not even her flesh.”

While another tweeted, “I thought it was bad enough Meghan Markle had to get baptised, but now it appears she has been told to start wearing the nude tights. The humanity.”

On 9 June, the Duchess of Sussex made her debut Buckingham Palace balcony appearance. Decked in a powder pink skirt suit by Carolina Herrera, the 37-year-old looked every inch the royal and even treated flag-bearing spectators to a regal wave from atop the Queen’s main residence.

The ceremony – which marked Her Majesty’s 92nd birthday – brought the whole royal family together for the first time since the Duke and Duchess of Sussex’s May 19 wedding.

Less than a week later, the Duchess of Sussex carried out her first solo engagement with the Queen. The royal duo headed to Cheshire via royal train – a gesture which has yet to be extended to the Duke and Duchess of Cambridge – for a busy day of unveiling plaques and shaking hands with members of the public.

During the 24-hour visit, the pair unveiled the Mersey Gateway Bridge at the Catalyst Science Discovery Centre. The duo later honoured the national minute’s silence to mark the Grenfell Tower fire anniversary, as a siren sounded outside Chester Town Hall.

Her Majesty and new granddaughter-in-law graced the headlines after the loveable duo were photographed giggling together during the engagement.

For the first time since the royal wedding, Meghan played guest at Prince Harry’s cousin Celia McCorquodale’s nuptials on 18 June.

But her AU$7,000 Oscar de la Renta dress divided royal fans across the nation with many taking to social media to question whether or not she had lost her style mojo. 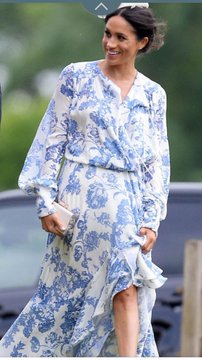 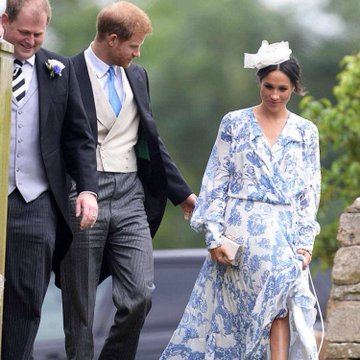 One Twitter user wrote [sic]: “Oh no sorry Meghan Markle this is not you, way too big!! Where has your lovely style gone?”

The Duchess was also mocked online for accessorising the church-appropriate look with a Marks and Spencer fascinator, as one social media user compared the hair piece to a shower loofah.

On 19 June, the Duchess of Sussex made her Royal Ascot debut in an asymmetric shirt dress by wedding dress designer, Givenchy.

The newlyweds later presented the winning trophy together.

On 26 June, the Duke and Duchess of Sussex joined Her Majesty at the final Queen’s Young Leaders Awards. For the ceremony, Meghan opted for a pastel-hued cold-shoulder dress by Prada – which bore striking resemblance to her Trooping the Colour 2018 aesthetic.

But the Duchess came into criticism at the evening event, after social media users called out the royal for ‘breaking’ royal protocol. Instead of adopting the ‘duchess slant’, Meghan was accused of being ‘disrespectful’ to the Queen by crossing her legs for a photocall.

After a short break away from the camera shutters, Meghan joined her husband at the Commonwealth Youth Receptionon 6 July. Dressed in a punchy yellow shift dress by Brandon Maxwell, the former ‘Suits’ star paid sartorial tribute to her American heritage.

In terms of accessories, she kept them understated with a pair of Manolo Blanhik heels and subtle diamond earrings by Adina Reyter.

On 9 July, the Duke and Duchess of Cambridge’s third child, Prince Louis, was christened at Chapel Royal in St James’ Palace.

Ahead of the ceremony, the Duchess of Sussex surprised fashion followers by throwing a sartorial curveball in a khaki-hued dress by Ralph Lauren. The 37-year-old paired the dress with a bespoke hat by Stephen Jones and co-ordinating Manolo Blahnik suede pumps.

While the brothers dressed in traditional uniform for the occasion, the Duchesses wore contrasting dress and hat combos. The Duchess of Sussex chose a bespoke Dior dress (which boasted her now-signature bateau neckline) while her sister-in-law opted for an ice blue Alexander McQueen dress and co-ordinating Sean Barrett hat.

The Duke and Duchess of Sussex’s debut royal tour

On 10 July, the Duke and Duchess of Sussex touched down in Ireland for their first inaugural royal tour at the request of the government.

Disembarking from the private jet, Meghan could be seen in a forest green skirt by go-to label of the moment, Givenchy – a diplomatic fashion choice for the couple’s Emerald Isle arrival.

And the trip proved an opportunity for the Duchess to flex her sartorial muscles, as she tackled a grand total of five outfits during a 24-hour turnover.

The Duchess of Sussex is no stranger to Wimbledon, as she has played spectator in support of close friend Serena Williams in recent years.

But the 2018 tournament was worlds away from what the former actress was used to, as she took a seat beside sister-in-law the Duchess of Cambridge in the royal box for the 2018 Ladies’ Singles Final.

In stark contrast to her 2016 Wimbledon look, the Duchess opted for a pinstriped Ralph Lauren shirt tucked into a pair of AU$2,500 wide-leg trousers also by the American fashion house for the tournament.

The Nelson Mandela exhibit in London

Suitably clad for the heatwave in an AU$1,000 sleeveless trench dress by House of Nonie, the Duchess of Sussex arrived at the Southbank Centre’s Queen Elizabeth Hall in London for a tour of the Nelson Mandela Centenary Exhibitionon 17 July.

It’s interesting to note that it was the first time that Meghan had chosen an independent Canadian brand since before the royal wedding – a nod to her ‘Suits’ career perhaps?

The history-making Nelson Mandela exhibit was in collaboration with the Apartheid Museum and the British Anti-Apartheid Movement Archives.

During their debut trip to the London landmark, the newlyweds were given a tour of the exhibition with guests including South Africa’s High Commissioner to the UK, Thembi Tambo and Nelson Mandela’s widow, Graca Machel in tow.

The Duke and Duchess of Sussex treated the nation to their first post-wedding kiss at the Sentebale charity fundraising polo match on 26 July.

Giving lessons in how to tackle the British heatwave, Meghan opted for an  AU$4,000  denim dress by Carolina Herrera for the charity event. To accessorise the summer-ready look, the Duchess recycled her go-to  $875   Aquazzura and a J Crew Fan Rattan clutch   bag in her grasp.

But the question on everyone’s lips remains: did she borrow the accessory from Pippa Middleton who carried the must-have on one of her fashionable Wimbledon 2018 outings earlier this month?

In one final sartorial push, the royal newbie threw in a pair of Tom Ford sunniesfor good measure – which can be yours for $630

For the occasion, the Duchess wore a navy sleeveless Club Monaco outfit finished with a Philip Treacy hat, and Aquazzura pumps – because she is royalty after all.